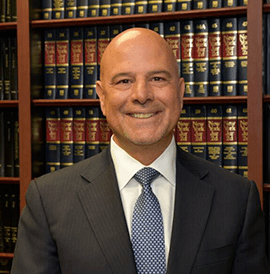 Anthony J. Licatesi is the senior litigating partner of Licatesi Law Group, LLP, a law firm with practice concentration in personal injury as well as no-fault medical collections through arbitrations and civil litigation. Mr. Licatesi heads an impressive litigation team with many years of experience as trial counsel to many law firms as well as numerous health care providers. The firm has had tremendous success representing persons involved in all types of serious injuries and automobile accidents. In addition, Licatesi Law Group is a pioneer in the No-fault legal industry and the leading No-fault Arbitration/Civil Litigation firm in New York State.

As a member of the New York State Trial Lawyer’s Association, Mr. Licatesi has work with the Governor’s office, as well as the New York State Insurance Department (DFS) involving various procedures and regulations within New York State’s Insurance laws. He received a Bachelor of Science in Marketing and Management from New York University in 1984 and graduated from Hofstra University School of Law receiving his Juris Doctor in 1987.

As an active member of the Atlantic Beach community, he has served as President of the Atlantic Beach Estates Civic Association and is currently a Commissioner of the Greater Atlantic Beach Water Reclamation District. Additionally, he has volunteered his time as Commissioner and coach to the Cedarhurst, Hewlett and Woodmere Little Leagues. Mr. Licatesi was elected to the Lawrence School District Board of Education. Mr. Licatesi received a Citation from the Nassau County Executive for his spirited leadership, dedication and support to the community. Shortly after Hurricane Sandy, Gov. Andrew Cuomo’s Office of Storm Recovery (GOSR) appointed Anthony J. Licatesi Co-Chairman of the Atlantic Beach New York State Rising community reconstruction committee to help rebuild a more resilient coastal community and implement new and innovative strategies aimed to establish a stronger and better future for Atlantic Beach residents.

Mr. Licatesi understands that the underlying foundation of today’s society is our youth and therefore was an integral part of a humanitarian movement within the real estate and construction industry to benefit our children. Mr. Licatesi is an original member of the Board of Directors for the Torch Foundation, a not-for-profit charitable organization within the real estate and construction industries whose single goal is to raise money for needy children’s charities. The Torch Foundation has raised millions of dollars for such children organizations as Tomorrow’s Children’s Fund, Hope with the Heart, The New York Child Learning Institute, Covenant House, Cleary School for the Deaf, The Child’s School and Columbian Presbyterian Medical Center. Mr. Licatesi has also been an active fund raiser for other numerous charities including the Lustgarten Foundation.